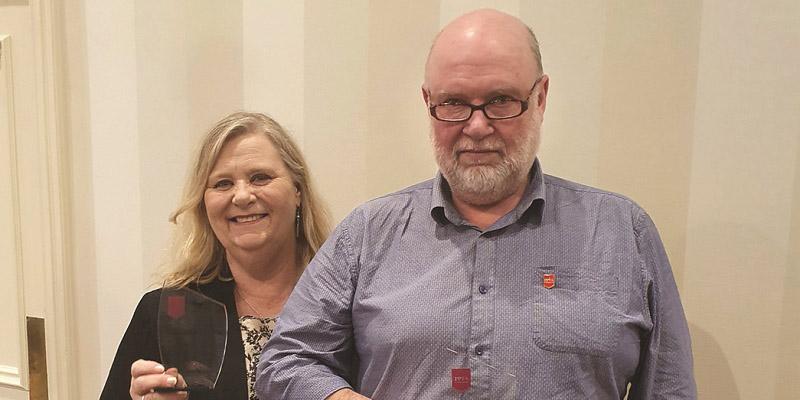 Celebrating service to the union

A brother and sister duo with a combination of nearly 70 years of PPTA Te Wehengarua service, were among those honoured at a celebration of Manawatu-Whanganui membership.

The event was the brainchild of the Manawatū-Whanganui regional committee. Members from the region gathered at Caccia Birch House on November 26, 2020, to see three stalwarts receive the PPTA Te Wehengarua Service Award for exemplary activism, to the benefit of their colleagues, over a substantial period of time.

A second set of awards were handed to those members in the region with 30 years or longer of PPTA Te Wehengarua membership. Among these recipients were the brother/sister combination of Kathleen and Mike O'Hara (pictured). Not only do Mike and Kathleen have combined PPTA service of nearly 70 years, but they are both current branch chairs – Kathleen at Cullinane College and Mike at Whanganui Girls' College.

PPTA executive member Rob Torr spoke at the event, noting the importance of PPTA's member-led branch and regional structures which ensures there are active delegates on every PPTA Te Wehengarua worksite. Torr, who is also PPTA Te Wehengarua's representative on the CTU national affiliates council, said that this structure ensured worker voice and was the envy of many New Zealand unions. "The branch is the heart of the PPTA," he said.

The celebration and dinner was the end of a huge year of activism for the Manawatu-Whanganui region.