PPTA deputy general secretary Yvonne Oldfield on the historic international agreement between unions, employers and governments to end violence and harassment at work.

At the sound of the gavel marking the acceptance of the final line of the International Convention to Eliminate Violence and Harassment at Work, the room erupted into cheers, song and dance.

It was the end of two years of campaigning by the international union movement and two weeks of late nights negotiating a new standard to ensure people are safe at work.

PPTA deputy general secretary Yvonne Oldfield was part of the New Zealand delegation to the International Labour Organisation (ILO) centenary conference held in the UN headquarters in Geneva in June. With the support of the International Trade Union Confederation she attended to continue her work on the convention (reported on in the November-December 2018 issue of the PPTA News) as part of a group providing technical and legal advice to the ILO workers’ delegate advocate Marie Clarke-Walker.

The education sector is recognised internationally as being at relatively high risk with respect to violence and harassment, Yvonne said.

“Teachers in Aotearoa strive to foster a safe environment in schools, and we like to think that our members do not face the same level of violence as colleagues in some other parts of the world. Nonetheless we are increasingly seeing situations where students or members of wider communities subject teachers to abuse, harassment, stalking, and assault, including gender violence and harassment.

“This has occurred on school grounds, in class, in the online space, and sometimes even at the teachers’ homes. This continues to be an issue for our members, as it is in other sectors such as health and transport,” she said.

A lot of work has been done in the year since we reported the first stage of the process to achieve the new convention, with worldwide lobbying of governments by unions to ensure governments supported the ILO process.

“A number of existing conventions dealt with workplace health and safety and human rights but none adequately addressed violence and harassment in the world of work – including situations involving third parties such as clients, patients or students,” she said.

“It was very intense work. The standard setting committee met for two weeks and sat until 10pm. I was part of a small technical, legal working group contributing to each day’s talking points and speech notes for the union group’s advocate,” Yvonne said.

The committee itself was huge, comprising up to 600 people, she said. “There are almost 200 countries represented and every country has one or two union, government and employer representatives.”

Getting it over the line

The text of the convention was negotiated bit by bit with delegates arguing over one word at a time. The adjudicator would strike his gavel when each line was accepted.

“It was thrilling to get it over the line – even getting the commute covered. To illustrate the problem we cited recent New Zealand examples of nurses getting assaulted leaving work at night, which could be fixed by having security guards walk them to their cars at the end of their shifts,” she said.

When the last part of the convention was accepted the feeling was amazing, Yvonne said. “Delegates from the African countries started singing and dancing, there was a conga line. It really was a life highlight.”

A small country punching above its weight

New Zealand played a strong role in the development and passing of the convention and Yvonne credited CTU vice president Rachel Mackintosh who worked even later into the night than the rest of the delegation doing translation work in French.

CTU president Richard Wagstaff said he was enormously proud of the work by New Zealand union representatives “who have done so much and were active for more than two years in ensuring this convention was passed. We also worked hard with the New Zealand government who voted in favour of the convention” he said.

The next step in the process is for the New Zealand government, which voted for the convention, to now ratify it.

“We need to make sure our existing laws fit,” she said.

A convention needs to be ratified by a certain number of countries within the first two years or it will lapse and Yvonne hopes that New Zealand will be one of the early adopters.

“I am keen to get stuck into the ratification process to provide the benefits for union members like ours,” she said. 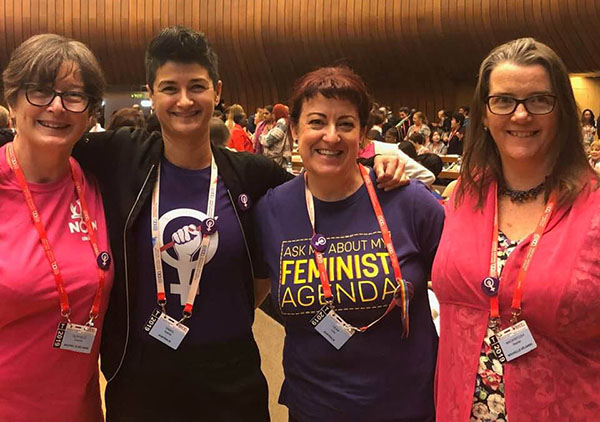