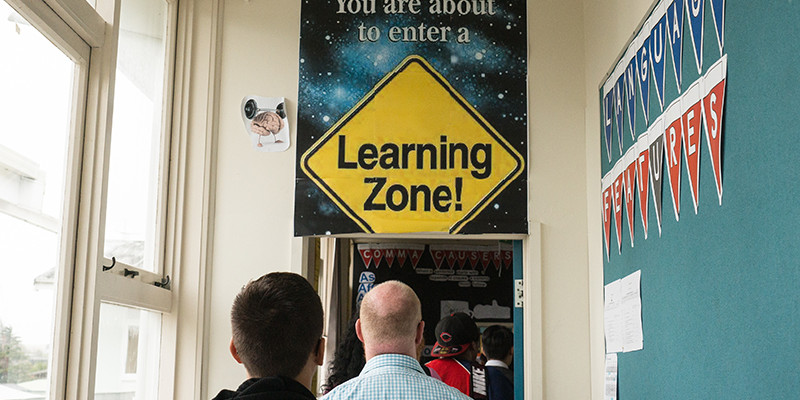 When PPTA News put a call out for teachers learning te reo we were overwhelmed by the response. There was far too much for just one article so we are breaking it down into the 'My journey with te reo' series. This is Whangarei Boys’ High School science and physics teacher Tony “Haggis” Henderson’s journey. When I was a wee boy, in the early 1970s, my Granddad was alive and he was an ex bushman from the crosscut, two-man, handsaw days. He worked in the bush with all sorts of people, including Māori people and he did not like mispronunciation of names - English, Norwegian, Māori, Czech or any other ethnicity. He asked me one morning what I was going to do that afternoon. I said "Mum is taking us to 'katty-kat' (sic)". He told me that there was no such place. I was puzzled and, after a short discussion, we arrived at the fact that Mum was going to take me to Kati Kati. He told me that it is very rude to mispronounce names. This planted a seed in me. If we fast-forward through my teen years, when te reo was being introduced into secondary school, many of my racist classmates were proud of getting 6% and similar in the topic tests but I really liked the language. This watered the seed.

There are two languages here?

Sometime later, I was out sailing on my little P class yacht and, on arrival home, I had the following conversation with my Mum.

Me: Mum, there are two languages here eh? Why is it that nobody has even started to teach me more than one?

Mum: I've not given it any thought, mate.

This put more water on the seed.

A change of direction

Fast forward about ten years to my 21st birthday, when I was working as a crane driver. I received some book vouchers as gifts and, with them I purchased an English-Māori dictionary, a Māori-English dictionary and both of Fr Pat Ryan's "Modern Maori" books. In gaps between lifts I learned words.

I was driving cranes because I had broken my engineering degree in half to get out and have a mental rest. I was mentally worn out and, earning a living doing something other than studying seemed like a holiday. However, the time came to return to engineering school and I did so, finishing the degree and, later, working as a professional engineer in Auckland city. At that time, I was the youngest person on the committee of the Auckland branch of the Institution of Professional Engineers, NZ (IPENZ) and I often went out to school careers days and careers nights to tell students about what engineers did and how they could become one. I found that I liked doing those visits more than I liked being an engineer. I was in the wrong job so I left and did a year at teachers' college and found myself as a high school physics teacher, which I still am doing.

While in teachers' college, I attended some te reo lessons and they were right back at the beginning. After the first lesson, I approached the tutor and asked for some help. I explained that I was not fluent and was not being conceited but I felt that my knowledge was ahead of where the lesson was being pitched. To his great credit, he told me that I was not being conceited and he asked me if I minded having my knowledge "probed" with some questions. I was keen and agreed. After he analysed my knowledge, he informed me that he was bewildered. He had never come across someone who had good pronunciation, great vocab and ZERO grammar. I laughed and told him that this made sense to me because I had memorised word lists in between lifts when I was a crane driver. He was keen to use this situation as a launch-pad for more knowledge and I enjoyed it.

Fast forward almost four years and, at the ripe old age of thirty, I studied for one year with the Correspondence School (now Te Kura) and sat school certificate te reo with the students that I had been teaching science to for the previous three years. They thought it was hilarious. I was delighted, as it meant that I felt I was finally making some progress.

Since then, I have been making quiet progress and can now hold a conversation on a street and stand up on a marae and give a Whaikorero. It has been fun and I really value having and using the knowledge.

Some of the people in my life were quite racist

One of the questions you asked was "Did you know any of the language before you started learning?"

In a nutshell, No. My childhood homelife with my parents was a typical Pakeha one and some of the people in my life then were quite racist. When I started to express an interest in things Māori, I met with some resistance and criticism. This slowed my entry into the language but it did not stop it altogether.

I use the language a great deal

I confess to not studying formally now. I do use the language a great deal and I am also linked in with other speakers of the language via Twitter. This has been terrific because it means that I get exposure to new words when experts tweet. I am also in correspondence with Aoife Finn, an Irish PhD student who is parsing te reo (and learning it) for her degree. It is wonderful to hear te reo with a Dublin accent!!!

My school has been very pleased that I speak te reo and I have been given the accolade and honour of speaking in formal occasions on behalf of our school.

Not quite a native speaker

My language ability is not (and never will be) to the level of a native speaker. However, if we gave a native speaker the rating of 10 out of 10, then I would put myself at about a 6 or a 7. This might be either hubris or just plain wrong and others might rate me lower.

Te reo has several steps. Pronunciation is easy once you realise that each vowel ends a syllable. The "syllable-isation" of te reo is hugely different from its counterpart in English and is part of the reason why people mispronounce words like Rangi and Paparoa ("Rang-ee" and "Papp-ah-roe-er" rather than "Rah-ngee" and "Pah-pah-raw-ah"). The next step is to assemble active sentences and these are very structured; the difficulty level builds logically and incrementally and I like it. The next step was and is one that I found tougher; passive sentences. An example of an active sentence in English is "Janine caught the ball". The passive version is "The ball was caught by Janine". Te reo is often spoken in the passive and this can be tricky. I still get this tangled and it has caused me some embarrassment but everyone is and has been very supportive and good-natured; it is something I appreciate a great deal.

A huge impact on teaching

This has had a huge impact on my teaching because it has helped me explain concepts from science (in general) and physics (in particular) to students who have been through Kura Kaupapa Māori. In addition, it has earned me respect from the students who might not speak te reo but who identify as Māori; they appreciate having someone who has put some hard yards in to meeting them halfway.

For both New Zealand as a nation and people as citizens, I think it (learning the language) is vital. I heard a terrific quote from my wife (who speaks three languages): "Monolingualism can be cured". For as long as the founding language of our nation is marginalised, there will be resentment and "other-ism". Wales and Ireland have embraced their original languages and they are all the richer for it. New Zealand could be less angry, more inclusive and more creative with the solutions to problems; a variety of language can lead to a variety of thinking which can, in turn, lead to more creativity with problem solving.

For individuals, bilingualism and multilingualism strengthens brain pathways and helps protect against dementia diseases in the elderly. In addition, in my experience, I have seen bilingual and multilingual students outperform those around them when dealing with a topic that needs more than one viewpoint. I can only presume that this is because they are used to doing that.

Lack of opportunities for immersion a barrier

There is a lack of opportunities for immersion. If you wanted to learn to speak French or Spanish or any other languages where places exist where those languages are first languages then you can travel there and immerse yourself in it. In New Zealand, everyone who speaks Māori can also speak English and it is so easy and tempting to revert - particularly when you are not on a marae. In addition, in a group, if even one person does not speak te reo then the others, out of politeness, will speak English and, bit by bit, this kills a language. It also removes the incentive to bother from those who might be wavering.

Being bilingual in New Zealand has made me feel more whole

Being bilingual in New Zealand has made me feel more whole, more honest and more useful. It has enhanced my work, my thinking and my relationships with those around me. I have received far more than I have given and I am hugely grateful to all the wonderful folk I have met along the way who have helped me out. I can never pay them back but, just like the movie, I can pay it forward.