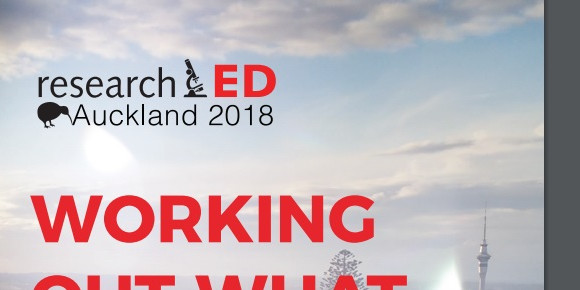 Some thoughts on researchED Auckland

On the weekend two of us from PPTA national office attended the first researchED conference to be held in New Zealand. A few reflections follow.

Discussions about curriculum – specifically what should change?

There was a lot of disquiet about the curriculum being too flexible and permissive, a worry I share to some extent too. However, I didn’t really hear much talk about  what should specifically change, or more to the point, be included in a more detailed ‘syllabus’. In one presentation there was a reading list from a private school in South Australia which included a lot of European classics, and another speaker mentioned classical and Shakespearean poetry...these were met with a lot of nods of approval.  This all felt a little uncomfortable, perhaps because of the over-abundance of English accents in the room compared to the sprinkling of Māori and Pasifika.

In regards to the content of the curriculum, there’s a really challenging conversation to have, where people will need to reveal their values and make the case for one novel, historical period, art-work or scientific theory over another.  Knowing how rarely these conversations happen even at school level, where it could probably be less fraught because people know each other, it's a bit hard to see how this will happen more widely.

If there is going to be a conversation about what should change and become more specified in the New Zealand Curriculum, I don’t think it’s a good idea that British expats and teachers at an exclusive school are seen to be leading it. In fact, however good their intentions, it will make it fall over at the first hurdle.

Perhaps a bit unnecessarily provocative, but I tweeted towards the end of the day:

Is #redauck just a bit of a conservative pity party? At times feels even more embattled (whiny?) than a backs to the wall union conference

Basically, there were a lot of people attracted to researchED who probably wouldn’t find themselves at home in the mainstream educational establishment, and as a result there was a bit of (tidily dressed and well enunciated) ‘raging against the machine’.

Two particular topics of ire were NCEA (and in particular the changes proposed in the review) and MLEs. Unsurprisingly, these are similarly controversial topics at PPTA conferences.

What was different though was that there didn’t really seem to be anyone speaking up in defence, nor did there seem to be any recognition that the criticisms they raised are actually well known and widely understood. A couple of examples of the sense of being ‘embattled and not listened to’, that actually just seemed a bit out of touch were:

Having said that, the vast bulk of what I heard at researchED was entirely consistent with mainstream ‘good practice’ about teaching and learning.

Tom Bennett, the founder of resarchED, a charming Scotsman, talked to a packed workshop on behaviour management. His key messages were largely what you’d hear from a PB4L trainer – high and explicit expectations, consistency, and collective responsibility. Sure, he wasn’t into co-creating class rules with the students, but plenty of teachers here aren’t too, and he even acknowledged it’s perfectly possible to have great behaviour in schools without uniforms.

Even Katherine Birbalsingh, ‘England’s strictest teacher’, had a lot of messages that wouldn’t be out of place in regular teacher education in New Zealand.

Building a collective identity is often done in opposition to something (or someone) and it was interesting to observe this being done at researchED.

PPTA gatherings generally set up in opposition to neoliberal politicians (and their enablers in the public and private sphere) who want to turn education into a market place.

Gatherings like u-Learn make traditional and change-resistant teachers and leaders into their opposition (having only attended one, I could be wrong).

researchED in contrast identified the ‘liberal establishment’ with their project based learning, and breaking down of disciplines as their adversaries.

Unsurprisingly, at all of these, there are strong claims made that ‘our side’ is simply advocating evidence based positions, and it’s the opponents who are the dogmatic ideologues.  And alongside this, the oppositions’ stances are often wildly mis-characterised and exaggerated.

Possibly there hasn’t really been a space in New Zealand for self-identified educational conservatives before. Maybe this emergence (in a sort of dialectical way) is a sign that the ‘progressives’ are in the ascendancy?

Despite some reservations, this event's opening up avenues and topics of debate, in a generally respectful and open minded way is probably a good thing. It reminded me of something Amartya  Sen writes in his book “A Theory of Justice”, summarised here:

There are many possible theories of justice. In the beginning of the book he tells the engaging story of three children, Ann, Bob, and Carla, who are quarreling over the fate of a flute (p. 12). Ann claims the flute on the basis that she is the only one who can play it, Bob claims it because he has no other toys to play with whereas the others do, and Carla's claim is based on the fact that she made the flute in the first place. All of these statements are taken to be true, and Sen's point is that one can produce intuitively plausible reasons for giving the flute to any one of the children. Utilitarians—and for different reasons, Aristotelians—would favor Ann, 10 egalitarians Bob, libertarians Carla, but the real point here is that there is no reason to assume, […,] that we have to decide which of these answers is the right one. Sometimes there is simply a plurality of "right'' answers. The idea that there is only one kind of just society […] and that all others represent a falling off from this ideal does not seem a plausible response to the pluralism that undoubtedly exists in the modern world.

Education is definitely an area where pluralism of values and voices can and should co-exist and researchED Auckland was a good demonstration of this… even if it was a bit awks  for us few lefties who made it along.