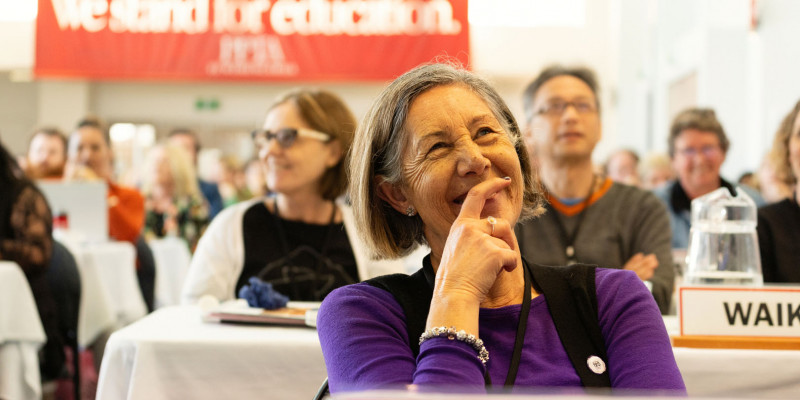 Guidance counsellors have been a part of secondary education in New Zealand since the late 1960s. Their clients are students, staff and families/whanau in the school community.

Most school guidance counsellors are members of PPTA.   The union represents them industrially and professionally.   The majority of school guidance counsellors are also members, or provisional members, of the NZ Association of Counsellors (NZAC).   Many boards of trustees require this as a condition of appointment to a position, because it ensures that the counsellor is bound by an appropriate code of ethics and complaints process, and has access to a range of professional learning opportunities and professional support.

The PPTA model for a professional growth cycle is available here and can be used for Guidance Counsellors.

Elements of the Professional Growth Cycle

(a)  Principals and professional leaders will facilitate a common understanding of the Standards or Paerewa in their own context and what meeting and using them in their practice looks like (Not annually but once in place revisit from time to time and with new teachers to the setting).

PPTA comment: If you need them the Teaching Council have quality practice template examples for guidance counsellors here: Our Code, Our Standards :: Teaching Council of Aotearoa New Zealand

(b)  Principals and professional leaders will design with teachers an annual cycle of professional growth in their setting, using the Standards or Paerewa and support teachers to engage in it, fostering an environment for inclusive, collaborative teacher learning.

(d)  Every teacher will be given the opportunity to discuss and receive feedback on their practice including observation, particularly for teachers holding Tōmua practising certificates (provisionally certificated teachers).

PPTA comment: Attending professional supervision can be part of meeting this element for Guidance Counsellors. Observation may be part of a growth cycle, but it is not compulsory. If Observation is part of your growth cycle then please discuss with the professional leader whether this can be done ethically as part of your work, if not then it should be noted that this is not a requirement for the Guidance Counsellor role.

(e)  Principals and professional leaders will confirm annually that each teacher has participated in the annual cycle and will also provide a statement to the teacher about whether they meet (Tūturu: Full Practising Certificate) or likely to meet (Pūmau: Subject to Confirmation) the Standards or Paerewa (but with no requirement to create evidential documents).

(f)  If in the Principal or professional leader’s judgment the teacher does not currently meet the Standards or Paerewa, they will discuss that with the teacher and provide support to enable improvement and if sufficient progress is not made, they may commence formal performance management processes outlined in employment agreements. Note that in these situations the Council’s registration and certification policy will set out the expectations for the endorsement of a practising certificate renewal.

13 Reasons Why - conversations around suicide

Graphic portrayal of suicide in Netflix series '13 Reasons Why'

The series ‘13 Reasons Why’ released by Netflix has become one of the most watched and talked about series on social media.  It has captured a largely teenage audience and caused considerable concern about young people’s safety due to its graphic portrayal of suicide and sexual assault.  The programme has been reclassified as RP18 by the censor, an indication of the level of public concern about the impact of this programme on vulnerable young people.

Teenagers identify with the characters

From a teenager’s point of view the programme and the issues it raises are relevant; the teenagers it portrays have a glamour factor and encourage identification with the characters. This potentially increases risk of suicide contagion (also known as ‘copycat suicide’) if the viewer is an at-risk teen with insufficient support around them.  For an older teen with a well-developed critical awareness and supportive adults to talk to the risk may be lesser but is also individual as it is dependent on the particular life experiences of that young person and their exposure to suicide and sexual assault. There are some published concerns that the graphic portrayal of the suicide in 13 Reasons Why verges on being instructional.

The Mental Health Foundation has gone as far as to say the release of this series is unethical.  Given that many of our students have already viewed this programme and it is topical we need to be prepared to respond appropriately. Shaun Robinson, head of the NZ Mental Health Foundation says, in his article on the Spinoff website, 13 conversations to have about 13 Reasons Why, that it is important to be having conversations about slut-shaming, bullying, sexual violence and suicide because these are the issues facing many young people.

“…conversations and stories that oversimplify the causes of suicide, present suicide as a reasonable response to difficult circumstances, explicitly discuss methods of suicide and fail to explore any solutions or avenues of help aren’t safe conversations and put vulnerable people at risk of taking their own lives.

We need to have open, honest and informed conversations about these really challenging topics and be prepared to keep talking about them. We need conversations that help people to understand that suicide is preventable, that we each have the power to help those in need and that most people who feel suicidal will go on to recover and lead great lives.”

13 conversations to have about 13 Reasons Why

Although we may all have our adult concerns about the programme and the issues it shows so graphically, it has captured young people’s attention and offers parents and whānau an opportunity to talk with them about their world.

This is not to be confused with providing wholesale conversations about suicide at school which would be contravening the Updated Suicide Prevention Guidelines for Schools about who is appropriate to facilitate and manage these conversations.

It is important to have trained professionals facilitate these conversations because they have the specialist skills to identify mental illness and assess suicidal risk.

Where to get help:

For more information about support and services available to you, contact the Mental Health Foundation’s free Resource and Information Service on 09 623 4812 during office hours or email info@mentalhealth.org.nz