Charting the course of feminist history

A new book on the history of the New Zealand Working Women’s Charter is reviewed from two perspectives - by Maryan Street who was actively involved in its adoption by PPTA, and by Jacinta Grice and Bernie Lee who are now carrying the torch.

As I watched a large march heading towards the American Embassy in Wellington at the beginning of July, protesting at the US Supreme Court’s overturning of the right to legal abortion, enshrined for the last 50 years in Roe v. Wade, I thought how apposite this book is in its reminder of the struggles which have gone before and the victories which are only maintained by constant vigilance, activism and protest.

If I were to sum this historical work up in a catch phrase it would be “much has been achieved but there is still much to do”. Even as I was writing this review, the government was releasing a 70-page report on how to close the gender pay gap and address the range of inequalities which exist for women in paid and unpaid work.

A sense of social progress for women

This welcome book is not so much a record of an artefact, the Working Women’s Charter, as an analysis of a movement and a period of feminist history in Aotearoa/New Zealand. 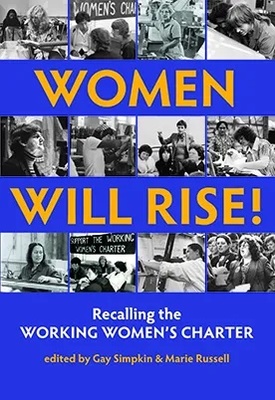 It is difficult to stay detached from it when the period covered was an integral part of my own developing feminism and it is contributed to by women who were then, and some still are now, close colleagues and friends. The whole telling of this time is redolent with personal memories of battles fought and won, and a sense of social progress for women against conservative movements, male chauvinism and entrenched institutional sexism and racism. I wish my dear friend Gay Simpkin had lived to see it published.

As the Working Women’s Charter was making its way through trade unions, feminist circles and women’s organisations in the late 1970s and the 1980s, I was a young teacher at Westlake Girls’ High School in Auckland and for some of that time, the Chairperson of the Auckland Region of the PPTA. Readers of this review will be drawn I am sure to Helen Pearce’s chapter on the PPTA’s response to the 16-clause Charter which ranged from the fundamental right to work for all, to the elimination of all forms of discrimination, equal pay for work of equal value, equal educational opportunity for all, improved working conditions, childcare and paid parental leave, through to sex education and birth control advice being freely available, including access to safe contraception, sterilisation and abortion without impediments.

I well remember the PPTA meetings which Helen recounts in her chapter, as we organised, educated women members and agitated to win over branches and then the region, despite fiercely vociferous opposition from conservative and fundamentalist male PPTA members, largely to the clause on access to abortion. Through Feminist Teachers and union meetings, we had learned the value of meeting procedures and used what had previously been a male domain to advance the Charter at meetings. Once we started playing by the rules they relied on, it became difficult for them to put up vexatious procedural objections.

As a result, we were not subjected to the trickery which our NZEI colleagues had to endure when it came to their Annual Conference when the Charter was up for discussion: after a tea break, when the Charter was to be discussed and voted on, the (male) President and Chairperson quickly brought the conference to order and moved a procedural motion that they move to the next business. It was seconded, the vote was put and declared carried within moments and while everyone was still wondering what was happening, the Charter was dropped from the agenda and the conference moved on to the next item of business. The women were furious but powerless to have it restored to the agenda. Their success had to wait for another year.

We also did things like sprinkle ourselves around the meeting room (usually a tiered lecture theatre at Teachers’ College in Epsom), so that it made it seem that the twenty of us who were organised came from all over the region. We deliberately did not sit together to give the impression of being greater in number than we were and it worked!

It was the activism of Māori, Pasifika and pākehā union women across the public and private sectors, together with that of political party activists which, over time, saw the Working Women’s Charter written into union positions, government policy and legislation.

Each chapter is written by eminently well-qualified contributors covering a range of skills and experience: lawyers, former MPs, including a former Cabinet Minister and Speaker of the House, union officials both paid and honorary, academics, historians, political party influencers, public servants – and all of them activists. As Grace Millar says in her Afterword, this is a “participant history” and the result is a stunning first-person account of a period of social change and feminist development in Aotearoa/New Zealand.

There is no doubt that the Charter established a political agenda for women, as Sue Kedgley says. It shaped the very substantial women’s policy of the incoming Labour Government in 1984. It is not simply a historical artefact – it is an ongoing measure of the progress of women towards equality.

As the protest march headed to the US Embassy, I was delighted that I recognised almost nobody on it. While that means that the torch has now been passed to others, it is essential that they gain from learning about past efforts and tactics. This book would be a great place for them to start.

Well worth the wait

Women Will Rise! is a book honouring the past, defining the present and looking to the future. It was created out of two women’s seminars, the Working Women’s Charter Seminar in 2009 organised by the Auckland Labour History Group and the Working Women’s Charter Seminar organised by the Wellington Labour History Project in 2010. Gay Simpkin (1942-2016), a previous PPTA deputy general secretary and field officer, organised some speakers and others to write a chapter for the book.

This book has been long in the making but has been well worth waiting for.  It gives the history of the second wave of feminism and how the Working Women’s Charter with its 16 clauses was the basis of the campaigns that women took on. Interestingly, it is still as relevant today as it was during the 70s and 80s. The charter is based on equal rights at work and women’s rights over their own bodies. It was written at a time when unions were dominated by men and in the words of Gay Simpkin “it is a tribute to socialist women who worked to get the clauses accepted by the union movement”.

The historical perspective gives us an understanding of where we came from in terms of the charter. There was a charter in the 1930s and 1940s that the people in the 1970s were unaware of. Acknowledging the fight that has been undertaken, the successes that can be celebrated and achieving equality in the workplace is paramount. Sonja Davies, an iconic feminist, proudly drove the adoption of the Working Women’s Charter claiming it was the most significant campaign of her career.

Helen Pearce, in her chapter, recalls the history of PPTA adopting the Working Women’s Charter at Conference in 1981. Her account makes us proud that we are PPTA members. We also need to acknowledge it was a well orchestrated strategy which included branches, regions and national executive being organised by the Auckland Feminist Teachers, which included the work of Helen, Gay Simpkin and Shona Hearn to name a few of our PPTA wāhine toa.

Marie Russell’s chapter evaluates each clause to see what changes have been made since the 1980s and the adoption of the Working Women’s Charter. It is worth noting her conclusion that while we have made huge progress in some areas, there have been “positive changes including protective laws such as human rights legislation, and policies which at least laid a baseline against discrimination. Part-time and flexible work hours became more available, and childcare became generally available although variable in quality. Paid parental leave was introduced, initially for a very limited period. Issues around sexual harassment at work, which came into the open only after the Charter, were recognised in law and policy. Abortion law reform was achieved.”

Unionism has to grow

Neoliberalism did the women workers no favours. In the words of the late Helen Kelly, “Union membership is very important and effective for women workers. Women now constitute over 50% of New Zealand’s union membership. But unionism is still concentrated in traditionally organised sectors like nursing and teaching. Unionism has to grow and we have to ensure that all workers can be protected and empowered by union membership.”

This book is definitely worth reading. In the words of Sue Moroney, we are proud to represent PPTA, a union that delivered those aims of the Working Women’s Charter such as paid parental leave. We still have much work to do. Striving for equal pay, for work of equal value is about achieving a basic human right - the right to be treated fairly, irrespective of gender or race.

This book is a taonga for this generation and generations to come.