Home > News/Media > In the belly of the beast 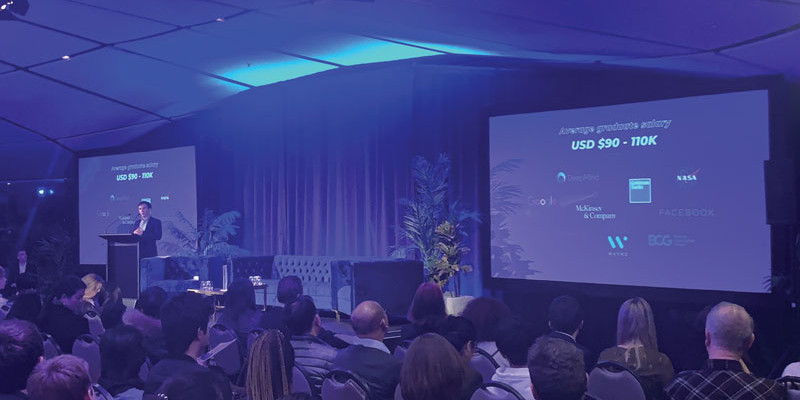 In the belly of the beast

I'd somehow ended up on their mailing list, and the lure of hearing CEO Jamie Beaton, former Prime Minister John Key, and former Minister of Education Nikki Kaye talk about "the future of education" to a bunch of parents willing to spend a small fortune to let their kids stay home and go to school via webcam was an intriguing proposition.

The launch, at the Auckland War Memorial Museum, was a glitzy affair, beginning with a guided tour of the museum and culminating in a presentation in the panoramic event centre on the roof featuring an open bar and platters of finger food. On arrival we were split into groups and escorted through the museum by Crimson tutors, all well-dressed young people in branded polos, and all of whom seemed to be ex-Crimson students. Their model seems to have only a small number of qualified teachers on staff (who the tutors kept referring to as "professors"), with tutors making up the numbers. A photo of the teaching team of 10 showed the makeup of the staff to be 90% Pakeha, 90% male and about 80% above the age of 50. One thing that was quite clear was that our guide didn't seem to know the difference between curriculum and assessment. She took great pains to tell us how amazing the Pearson Edexcel A-Levels assessment system was, how it was so much better than NCEA, but couldn't tell us what curriculum they were teaching. Or why.

Arriving at the top for the actual presentation, it was clear Crimson had pulled a big crowd. Auckland is a famously diverse city, with the largest Polynesian population in the world, but you wouldn't know it from looking at the four or five hundred conservatively-dressed parents and their children milling around. Jokes about Auckland house prices in the Double Grammar Zone peppered the evening's speeches. Crimson know their market.

Current executive principal and former Auckland Grammar principal John Morris was introduced by the MC (another former Crimson student) as a "change maker" for education in New Zealand - apparently for introducing the Cambridge qualifications to New Zealand because he didn't like NCEA. (I'd argue that seems more like being a "maintaining- the-status-quo-maker".) Morris' schtick was all about "choice" - choice for parents, the fact that current schooling systems didn't allow for choice, and how students going to CGA have more choice, and aren't hidebound to a 9am - 3pm school day. Morris was just the entree though, there to introduce the main course, millionaire wunderkind and Crimson CEO Jamie Beaton. According to Morris, Beaton is a "disruptor", a "digital native" and some kind of messianic Elon Musk figure, but for education.

Beaton's story has been told a bunch of times before. A plucky New Zealander who went on to study at Harvard and Stanford, was a Rhodes Scholar, and who set up Crimson to help other New Zealanders get into American Ivy League schools. For a price. The dollar value of things was something Jamie spent a lot of time talking about. CEO salaries in US dollars, billion-dollar dotcoms, and how much your earning potential increases with an Ivy League education. The one of dollar value that wasn't mentioned, and was also pointedly absent from any printed material given out on the night, was the actual cost of studying at Crimson Global Academy. (I'll save you a Google - about $25,000 for a full-time student, minus application fee, enrolment fees and various other bits and pieces.)

Emperor Beaton has no clothes

Following on from the mutual back-patting was a panel discussion, where Beaton, John Key, Nikki Kaye and another Crimson alumnus pontificated about the "future of education". Asked about failures with the current system in New Zealand, John Key was quick to say that the greatest thing holding education back is the union movement, which, he declared, "encouraged mediocrity." He came back to this point several times. Beaton talked at length about "relational pedagogy" as if he'd invented it and claimed that teachers in public schools "lack empathy" for their students. Beaton also mentioned his dream for "a world without racism", which was pretty rich given the lack of diversity in the room. There was an awful lot of talk about "22nd century learning", although no one on stage could really articulate what this actually meant. But given the likelihood that any of the people in that room would still be alive in the 22nd century, I guess you can just make that stuff up.

For a bunch of grifters trying to convince parents to pay top dollar to attend an online school, the night was big on bluster, and not much else. Key fell back on well-worn platitudes, telling the crowd, amongst other things, that "life isn't a rehearsal", and what was being trumped as the Brave New World of education didn't sound much different from what every teacher in every state school in New Zealand has been doing this year under Covid-19 restrictions. Emperor Beaton has no clothes and, perhaps predictably, there were no opportunities to ask questions.

* Check The Spinoff for some interesting analysis of Crimson's claims about the efficacy (spinoff.co.nz)