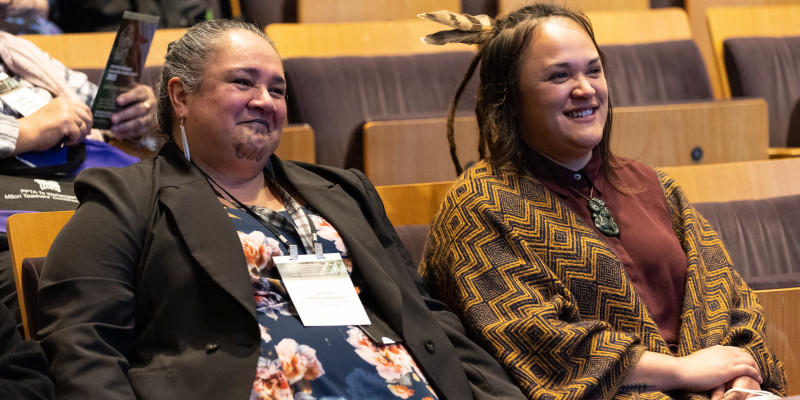 Teachers around the motu converged on Te Papa for two days of kōrero, waiata, manaakitanga and whanaungatanga

Aim of the game – boosting literacy

On the afternoon of the first day, participants were treated to an inspirational address from Dr Phyllis Callaghan (Ngāi Te Rākotō), a former English teacher and co-creator of award-winning video game Katuku Island. Katuku Island 2 is in production now.

She and her late husband, a kaiako whakairo, created the game to boost Māori students’ literacy.  Her key audience were the boys at school from gangs, dislocated from their own identity. “They only came to school for the whakairo, not for any other subject. They were visual.

“I wanted to change the social and cultural environment for indigenous people throughout the world. Our aim with Katuku Island is to get Māori and indigenous people awesome at literacy. People who are good with metaphors and similes can transport you to distant lands.”

One of the greatest things Māori have to offer the gaming industry is story telling, she said. “Technology is there for everyone and Māori can be part of this billion dollar industry. We just have to have a good idea and get some nice person to fund it.”

Assistant Māori Commissioner for Children, Glenis Philip-Barbara, (Ngāti Porou and Ngāti Uepōhatu) spoke about the rise of the kōhanga and kura generation. “I went to secondary school in the 1980s and in my generation no-one spoke Māori, no one at all.”

She commended the efforts of a brave group of people who demanded through a petition to Parliament in 1972, that te reo and tikanga Māori be included in the New Zealand school curriculum. “If it wasn’t for those brave souls, none of us would be here. The kōhanga and kura generation have surged forward, exploring all aspects of mātauranga Māori with passion, confidence and vigour.”

Glenis’ daughter Khali, who is one of the kōhanga kura generation, is actively involved in efforts to build a taonga puoro orchestra. Taonga puoro are musical instruments, used traditionally by Māori for a call to arms, dawning of the new day, communications with the gods and the planting of crops. “There are around 50 (taonga puoro) players so we have the critical mass. The confidence that’s growing among the next generation of players is something else. You can hear puoro being played in all settings, e.g. (Wellington-based band) Drax Project.”

Khali said she felt privileged to have been raised among so many kaiako Māori. “From a young age I knew it was cool to be Māori. She told conference participants to “keep doing what you’re doing. The dream is coming about today because of the kōhanga and kura generation and you, the kaiako.”

Mina Pomare-Peita, principal at Te Kura Taumata o Panguru, urged conference participants to be disruptive. “We are all leaders, we chose this profession to effect change. We are change makers, we must be and we have a responsibility to be. What are you waiting for? Be the change you want to see, be the disruptor.”

She said her world had been influenced by an over-abundance of negative images. “We are restoring and resetting these images into ones of wellbeing and flourishment. We don’t just want to be well, we want to flourish.”

Secondary teachers and schools needed to address unwellness and grief, in particular. “When my mother died 21 years ago I had to take the whole term off because there was nowhere to go to express my grief. Where can you go to grieve? I see it in our kids and my staff and our people and I worry about what we haven’t done. It’s part of our world.”