Home > News/Media > Thank you for your gold service, Mr Knight! 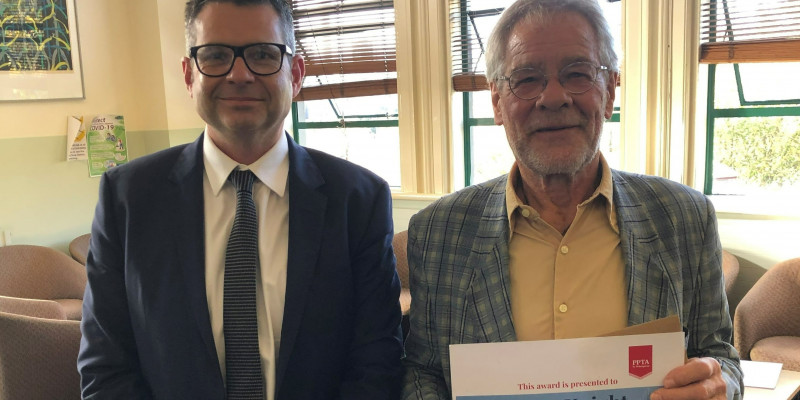 Thank you for your gold service, Mr Knight!

Tony Knight reflects on 50 years of being a secondary teacher and PPTA member.

Having been a secondary teacher and PPTA member for 50 years, Tony Knight still gets a buzz when an adult past-pupil appears unexpectedly, saying ‘Hello, is that you, Mr Knight? You were my teacher back in such and such a year. I still remember your history lessons’. “I love it when that happens, it is possibly the very best thing about being a secondary teacher.”

Tony’s golden anniversary was celebrated earlier this year, with a special ceremony at which PPTA General Secretary, Michael Stevenson, presented Tony with a certificate, a pin and a book, recognising 50 years of loyal membership and service.

Unionism was compulsory when Tony joined the PPTA Morrinsville College branch in 1971. “ I willingly joined the Morrinsville College branch of the PPTA, believing in collective responsibility, strength and effective maintenance of suitable conditions for teaching and learning, as well as adequate remuneration for recruitment and retention of teachers.

Power of belonging to PPTA

“I was sorry to see the end of compulsory unionism, so I am certainly one who would advise new secondary teachers to join PPTA. I'd say ‘Have a good look at your pay and conditions of work; and if you're still unsure, compare them to others'. All the material, as well as many of the skills benefits, that come with being a secondary teacher, have been won for you and your colleagues by the collective strength, the power of belonging, of the NZPPTA.’"

In the late 1970s and early 1980s, while Tony was Deputy Principal at Opononi Area School, teachers' pay increases were set by negotiations between PPTA and Ministry of Education representatives before arbitrators who heard statements about workloads and responsibilities by teachers selected by PPTA for their "typicality". On several of these pay-rounds Tony represented Area School Deputy Principals for PPTA, appearing at hearings in Wellington as an "expert witness".

In 1983-1984 he taught at Thames High School, where Tony Steele, then PPTA President, was a colleague. On Tony's recommendation, Tony Knight served on PPTA’s Curriculum Committee from 1984 to 1986, helping develop PPTA curriculum policy.

The last of the five schools he taught at in his fulltime career was Whangamata Area School, where he was a teaching (history, social studies, English) Deputy Principal for 15 years before "retiring" in 1999. Since then, he has worked as a day reliever at various schools around Auckland where he now lives.